Extending her efforts that she started as a high school activity, Ms. Kharbhih has devoted 30 years to develop a public-private information sharing platform against human trafficking. She talked about this activity together with her own life story and had an open discussion with students. 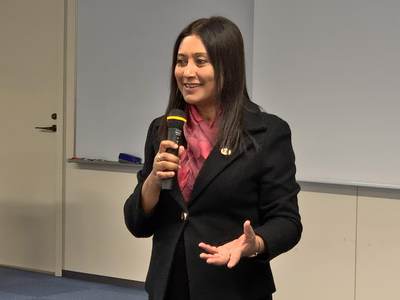 Ms. Kharbhih is from the state of Meghalaya, India. When she graduated high school, she decided to continue her school activities for local women's empowerment. She worked on developing the market for products handcrafted by local women and improving the quality of products. However, when materials became unavailable due to government environmental policies, income reductions forced many families to send their children to remote areas as labor. As Ms. Kharbhih and her colleagues moved to address the material shortage problem, a new problem arises when children sent to other states reported missing. After finding out that these missing people can be major targets for human trafficking, Ms. Kharbhih started working with the police, media, and social workers to rescue and protect them. They started sharing information via email and files, and later developed a management software in collaboration with the Indian Institute of Technology, and created the Impact Case Management Centre (ICMC) where police from four neighboring countries could share information. About 72,000 children have been rescued through a partnership centered on the ICMC. In addition, she developed training programs for police and journalists who are playing key roles to breaking down the trafficking situation. They have trained 30,000 people.

> Acted according to one's intuition, then looked back and analyze: on gaining the ability to communicate with influence

Ms. Kharbhih has repeatedly asked herself, "What is really important to me," when faced with serious and irreversible choices, such as when deciding whether or not to enter college, or when confronted with severe disturbance against her activities. By her commitment to her mission, she gained the support from global organizations such as Ashoka and the opportunity to study abroad with Fulbright scholarships in 2006. During that time, she acquired the ability to look back and analyze activities that she had been pursuing according to her intuition. In 2013-2014, she saw the completion of the ICMC and started working to solve a new problem of child labor in coal mines. She posed her eyes on local problems first, and that eventually led to social change affecting tens of thousands of people.

Over the years, she has been working to find "changemakers", who are various stakeholders that share the same aspirations, and bond them together in the center, Ms. Kharbhih says. She calls this style of leadership as "shared leadership". What is important for this is that stakeholders are not connected superficially, but by a deep partnership. They need to discuss matters patiently and share their aspirations, always share information, recognize each other's contributions, support the achievement of each stakeholder's goals (emphasizing on the principle of ownership), and communicate based on respect for humanity.

Finally, Ms. Kharbhih sent a message to the audience. "Recognize your own power, listen to your inner voice - gut feeling, and act."

(*) A person who addresses the social problems in a way to approach the fundamental parts that create the problems and works on the essential solutions. (From Ashoka Japan website). To date, approximately 3,700 people from 93 countries have been accredited by Ashoka and are receiving assistance for acceleration. 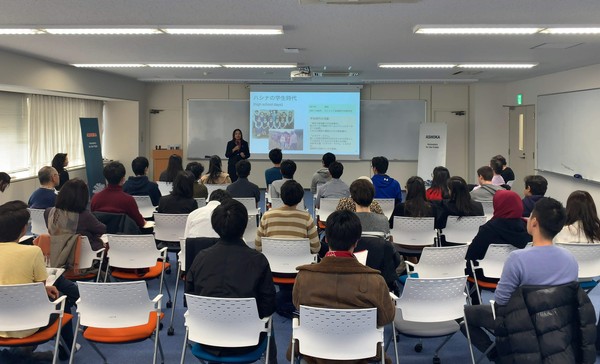