On 31st of January we welcomed Dr. Akira Kurabayashi to the Ookayama Campus for a presentation on the topic of "Driving Innovation Through Entrepreneurship". 12 ToTAL and open program students participated in the session.

Following the presentation from Dr. Kurabayashi, an active Q&A session took place. Mr. Tomohiro Kato, a former AGL student from Hitotsubashi University, who is now working at Architype Ventures, also joined the session. The evening concluded with a dinner where Dr. Kurabayashi and Mr. Kato both generously stayed back for further discussions on the state of Venture Capital in Japan. 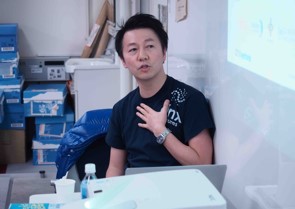 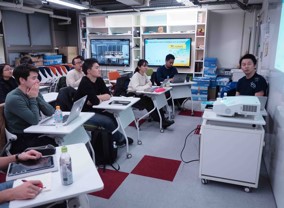 Dr. Kurabayashi, in his sixth appearance as a guest lecturer for this course, has been working in the world of Venture Capital (VC) / Corporate Venture Capital (CVC) for over 20 years - well before an VC/CVC ecosystem was fully established in Japan. In recent years, he has become one of Japan's most recognizable leader in the VC/CVC space with requests for comments and interviews flying in from various media outlets. He gave a passionate, insightful and truly inspirational talk covering a range of matters in relation to VC/CVC. Whilst much was discussed during and after the talk, here were my key takeaways from the evening.

Looking back at the world's largest companies by market capitalization following the aftermath of the Global Financial Crisis in 2009, there was not a single tech company in the top 10, other than yours truly, Microsoft. Yet, as of February 2020, US and Chinese tech giants including; Microsoft, Google, Amazon, Apple, Facebook, Tencent and Alibaba, (not in market capitalization order) dominate 7 of the top 10 spots and show no signs of slowing down in being the forefront of new market value creation. Indeed, this explosive growth enjoyed by tech companies now extends well beyond the world's largest companies by market capitalization, with nearly one-third of the S&P 500 Index (a weighted average stock index of 500 companies in the US) now being represented by tech companies.

Even in industries outside of traditional 'tech' domains, tech companies are creating a wave of "disruption" in all corners of industry; creating a sense of feeling that tech companies are fast becoming an unshakable corner stone of the global economy and giving rise to a new digital age.

And according to Dr. Kurabayashi, it's the VC and CVC investment that has been a driving force in supporting the growth of tech companies in recent years. One of the surprising figures presented to support this view was from a survey of 1,330 public companies established in the United States between 1979 and 2013. The survey found that 43% had (574 companies) received investment from VCs, and that these 574 companies represented 57% of the total market capitalization and accounted a whopping 82% of all R&D expenses.

During the talk Dr. Kurabayashi reminded us that "Data is the New Oil". And really, who can doubt that based on these figures. Even if this statement doesn't hold true in its entirety, it was certainly a good insight that value creation in the future will likely to continue this trend of being achieved through technological innovations.

Whilst there are different schools of thought and metrics that may be used to value an enterprise, market capitalization (number of total outstanding shares x share price) and Enterprise Value (EV: determined as market capitalization plus debt, less cash and cash equivalents) appear to be widely used in the industry. A recent analysis of companies above $100 billion (USD) in market capitalization revealed that those with more than a 200% increase in market capitalization had also recorded EBITDA (Earnings Before Interest Taxes Depreciation and Amortization) growth rates of more than 200%. Perhaps the extraordinary valuation increases we've witnessed in recent years are fully justified by the fact that tech companies are experiencing far higher revenue growth rates than companies in other industry groups, (e.g. banking, retail, manufacturing).

Yet, this begged a question. These so called "start-ups" are not publicly listed companies that can be valued using aforementioned metrics like market capitalisation. So, how do VCs like Dr. Kurabayashi actually estimate or foresee 'value' in unlisted tech start-ups? Although in practice there's no doubt that a range of models and metrics are utilised for investment appraisal purposes rather than relying on a single model as a source of truth, but of the ideas noted in presentation, the "Mendoza Line" model struck a chord.

The Mendoza Line can be used to estimate the future value of a tech start up based on its current revenue and revenue growth rates. Using these two inputs, VCs evaluate whether a start-up has the potential to make it to an IPO (Initial Public Offering) - before they've even turned a profit - thereby enabling a prediction of the recoverability of any initial investment.

As revenues increase more and more, revenue growth rates have a tendency to fall. For example, it's not hard to increase revenue ten folds from ¥100 yen to ¥1000 yen, but, attempting to grow revenue from ¥100 million yen to ¥1 billion yen would be quite a feat. Using this property, the Mendoza Line was devised by analyzing past IPO records which found that unless companies with $100 million in Annual Recurring Revenue (ARR) had least 25% of year-on-year revenue growth, it's difficult to IPO in the United States. VCs can then use this model to regress whether a company would likely exceed this line to assess its initial investment potential.

NB: Dr. Kurabayashi did note that it's fairly rare these days for a company to make it to an IPO in the US with many start-ups opting to get acquired beforehand.

Until recently, Japan's VC/CVC ecosystem to foster and support innovation had fallen significantly behind other countries, in particular the US. It's true that if you merely look at metrics like invested amounts as 'absolute numbers', Japan still lags well behind the US. However, according to Dr. Kurabayashi, in recent years Japan has shown its own strengths in developing a VC/CVC ecosystem. Using an analogy from baseball, he said that VCs in Japan rarely hit "home runs" that increase their initial investment by x100, but they do hit more "base runs" that increase their investment upwards of several dozens of times.

The 3 key words underpinning the recent strength of Japan's VC/CVC ecosystem are:

As a result of these factors coming together, there's been a virtuous cycle in the value creation process by VC/CVCs in Japan, which Dr. Kurabayashi expects to continue. He noted that we are living in a time of unprecedented opportunities, especially for people like students who are interested in start-ups and/or the world of VC/CVCs. For those aspiring entrepreneurs, or for those that don't aspire but are interested in entrepreneurship, the talks with Dr. Kurabayashi were both captivating and inspiring, to say the least. 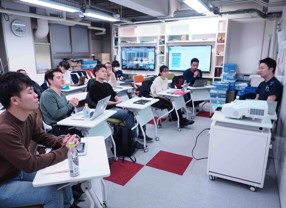 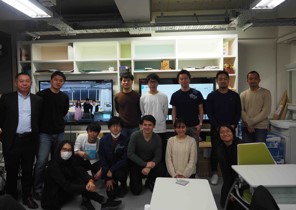 However, no matter how much Japan's VC/CVC ecosystem develops, running a start-up is no easy task. Of the many number of skills required to successfully run a start-up, based on his experience, Dr. Kurabayashi thinks founders and founding teams need to have "grit". After hearing this, no doubt many of us felt compelled to be more actively involved in potential projects and/or extracurricular activities to build up the grit to see things through from start to finish.

Whilst we can't guarantee whether he will be available again next year for another talk, if that is the case, I can't stress this enough to my peers, "don't miss the next chance, you won't regret it."

On behalf of everyone that participated in the evening presentation and Tokyo Institute of Technology, we'd like to thank Dr. Kurabayashi for generously providing us with this opportunity.