2020年7月22日 活動報告Recognition of Social Issues / Professionals and Value Creation I #4: " How does the evolving FinTech affect finance and society? Part II " was held on 26th of June, 2020 (reported by Kabir Shahriar, 2019 ToTAL student)

Financial Technology (so called "FinTech"), as the name suggests, is a modern approach to improve the quality of financial activities by the application of technology. With the advent of cashless transactions, blockchain, artificial intelligence, and cryptocurrencies, FinTech has attracted significant traction in recent years. To discuss the underlying principles, challenges, and advantages of FinTech, Tokyo Tech Academy for Leadership (ToTAL) invited Mr. Hideshi Roger Hoshino, Japan Country Head of Finetiq Limited and Mr. Maurizio Raffone, CEO of Finetiq Limited on June 26, 2020. The online session was attended by 19 ToTAL and OPEN students.

The primary question discussed in this session was "How does the evolving FinTech affect finance and society?" and the discussion began with an explanation of the infrastructure of cash transfers. The conventional cash transfer procedure within the same bank is the simplest, as it only involves two accounts in the same banking organization. The complexity increases when the cash is transferred between two accounts in different banks. In this case the central bank of the country, Bank of Japan in the case of Japan, regulates the transfer and confirms that the transaction takes place appropriately. In addition, the person to send the amount has to pay a commission to the bank for taking care this whole procedure. The complexity goes up even a notch further when the transaction is happened between two banking corporations in different countries. The concepts of Nostro account and SWIFT were briefly discussed at this point to explain all the behind the scenes processes taking place in this case. 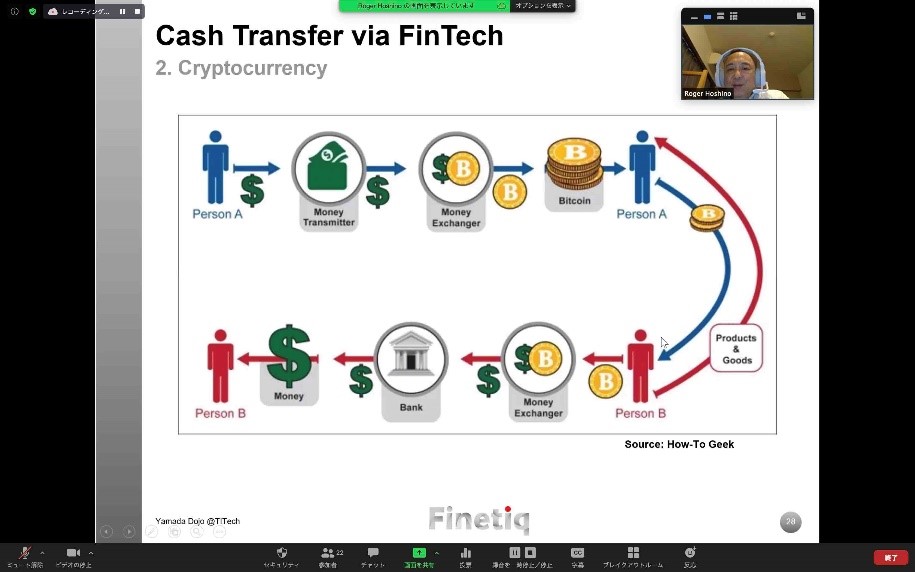 Next, 2 specific examples of FinTech were introduced and analyzed on the basis of their innovative concepts, relative advantages and disadvantages. The first example was of TransferWise, a venture by Taavet and Kristo from Estonia. By taking away the foreign exchange operation and keeping the transactions within one firm only, TransferWise has developed a system that is faster and cheaper for offshore cash transfers. The next example was of cryptocurrency. There is no doubt that cryptocurrency is one of the most revolutionary concepts of financing that have emerged in the recent years. An "all online" system of financing with no concept of onshore/offshore, extremely low commission, and near-instant transactions - the appeal of cryptocurrency is difficult to ignore. However, the fluctuating market value puts the cryptocurrency concept in a risky position from the point of view of an average person. With the analysis of these relative benefits and risks, the discussion on cash transfer was concluded.

Part 2-2. Creation of Trust of Currencies

The second part of this session began with an overview of the Bretton Woods system of monetary management and the discussion of fiat currencies (credit notes). The consequences of terminating the Bretton Woods system and the famous "Nixon Shock" incident were also explored. An interesting concept of fiat currencies is that they do not have any intrinsic value, rather the value is maintained by a government or the involved parties agree upon a certain value of the currency. Thus, the concept of trust is particularly important when it comes to currencies.

In the case of cryptocurrency, creation of trust is a fundamental requirement for its long-term success. A detailed analysis of the bitcoin lifecycle was presented to understand this issue better. The concepts of bitcoin address, hashes, miners, public and private keys were also discussed. Mr. Hoshino indicated that Trust of Currency has been changed; "Gold" backed such trust before "Nixon Shock", then "the government" backed such trust, and from now on, "technology", will back the trust of currency. After the summary of the whole discussion and a QA session, this meeting was concluded.

I honestly think the advancement of technology in the financial sector will drastically change conventional methods and concepts of financial transactions very soon. I do not have to look far to find examples, I myself have moved towards cashless payments and cash transfers through web/smartphone applications whenever possible in recent months. So, this discussion session was an excellent opportunity for me to learn the concepts and methods going on in the background of my financial activities. As engineering students, of course we understand the significance of learning these financial mechanisms, but we rarely get the opportunity to do so. Therefore, on behalf of the students who attended the session, I would like to offer my sincere thanks to Mr. Hideshi Roger Hoshino and Mr. Maurizio Raffone for giving us their time during these 2 sessions of Professionals and Value Creation.