2021年9月 6日 活動報告The 3rd round of "Professionals and Value Creation A/C", a ToTAL course, with a theme of "Hayabusa/Hayabusa2 and the Mystery of the Origin of the Universe" was held on 26/Jun/2021 (Reported by Yasunari Shinoda, 2018 ToTAL student)

The 3rd round of "Professionals and Value Creation A/C", a ToTAL course, with a theme of "Hayabusa/Hayabusa2 and the Mystery of the Origin of the Universe" was held on 26/Jun/2021.

On 26/Jun, the lecture and discussion about "Hayabusa/Hayabusa2 and the Mystery of the Origin of the Universe" were held online by Dr. Takahiro Hiroi, Brown University, for both 21 ToTAL students and 13 non-ToTAL students (OPEN students). This year, the workshop was held online via Zoom. 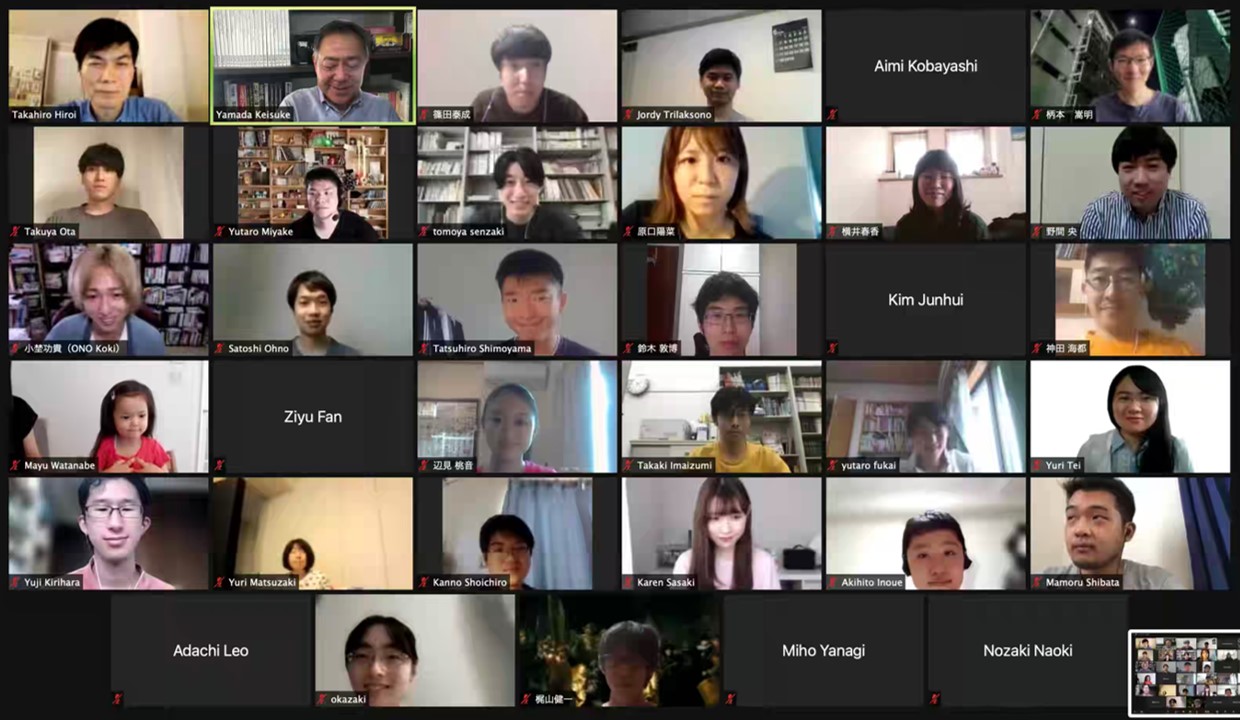 Ph.D. in Mineralogy from University of Tokyo in 1988, specializing in asteroid-meteorite spectroscopy. After finishing a 2-year JSPS postdoctoral fellowship, moved to U.S.A. as a visiting scholar at Brown University funded by Yamada Science Foundation in 1990. From 1991 to 1994, National Research Council Resident Research Associate at NASA Johnson Space Center. Currently, working as the operator at NASA multiuser facility RELAB at Brown University. In 2000, asteroid 4887 Takihiroi was named for the contribution to meteoritics. Participated in Japanese planetary spacecraft missions of Hayabusa, Kaguya, and Hayabusa2 as a coinvestigator of science instruments. In 2017, appeared in N.H.K. Cosmic Front Next program "Miracle Meteorite". About twice a year, giving lectures at Japanese high schools and other places.

Asteroid explorer Hayabusa returned samples of S-type asteroid Itokawa in 2010. Although its dramatic journey for 7 years became famous, its scientific accomplishments are not well known. By lunar landing and sample returns by the U.S.A. and Soviet Union around 1970, space weathering was discovered. Afterwards, the discussion whether space weathering also exists on S-type asteroids continued for 40 years until Itokawa samples returned by Hayabusa finally solved it. Then, in 2020 for the first time in the world, Hayabusa2 returned samples of C-type asteroid Ryugu which is believed to contain water and organics, raw materials for life. Finally, I will explain about mystery of the origin of the universe that has been revealed by astronomy and planetary science, and the possibility of world peace through future science.

<My purposes for arranging this lecture and discussion with Dr. Hiroi>

I, Yasunari Shinoda, am a 1st-year student on ToTAL (registered in Nov. 2018). I proposed and arranged this lecture. I have known Dr. Hiroi for a long time. For the first time, I met him at a conference. Then, we became friends at a dinner party. When I was an M2 student, he was in Japan for a lecture of Super Science High School in MEXT program. When he gave the lecture to high school students in Gunma, I was invited to be his assistant and followed him. I still remember taking hot spring together with him after the class and talking about various topics related to his research. I was so impressed with the topics at the time. So, I suggested that I would like him to see ToTAL students. At first, I introduced Dr. Hiroi to Prof. Yamada/ToTAL, and we had a meeting. I asked Dr. Hiroi to talk about his research on meteorites in the minor field of Planetary Science and his own career story as a researcher. 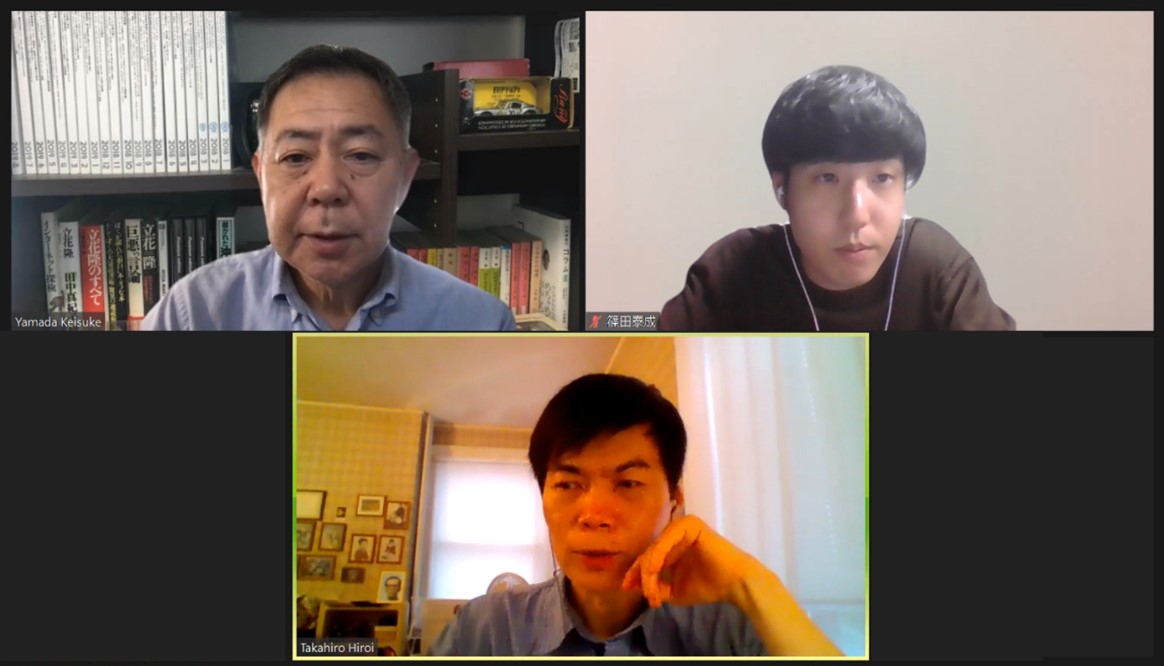 I , therefore, set following purposes of this lecture;

・to acquire the skills to obtain the pieces of information to test our hypothesis through communication with the guest speaker,
・to understand not only the latest topics of the guest speaker who are innovating in his area, but also the essence of the issues he is facing,
・to refine our vision of leadership through a multifaceted perspective.

On June 26th, Dr. Takahiro Hiroi was invited to speak of the Professionals and Value Creation A/C class. During his lecture, he talked about the process of proving his hypothesis through a long period of research in his area and how he dealt with the differences in opinions among researchers, as only a researcher with a long career can. The participants had many questions, such as "How to understand own field?" and "A researcher's goal." He also talked in detail about the Hayabusa/Hayabusa2 mission that he is involved in. Finally, he showed us the challenges that modern science cannot solve and the possibilities that scientific progress can offer. During Q&A session, I was impressed by the thinking of "agree to disagree" that he talked about. I felt that they need to respect each other as scientists while acknowledging their opinions and discussing them, although they have different views. In particular, he advised Ph.D. students on how to deal with their professor of them laboratory. 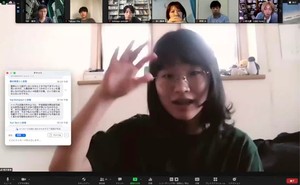 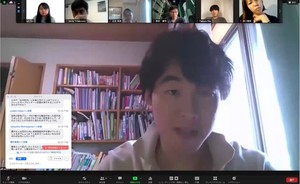 Dr. Hiroi's talk was very interesting for me. I was also surprised at the relevance of his topic and the movie "Your Name", which became a mega-hit movie in Japan a few years ago. I learned many things for the first time, such as the relationship between Antarctica and meteorites, Intelligent Design Theory, and the Moon's role on the earth. I think the participants were hearing the guest speaker's lecture and communicating with him. When he gave us this class, I was thinking that "how the discussion with professionals contributes to establishing our leadership?" then. I was able to get some hints in his talk for my leadership. Prof. Yamada always talks to us to establish a personal network with the guest speakers by communicating with professionals. As the proposer of this class, I would be grad if the participating students could continue to keep in touch with Dr. Hiroi. Finally, I would like to sincerely appreciate Dr. Hiroi for his sharing time with us via ZOOM from the US (in the late night there). 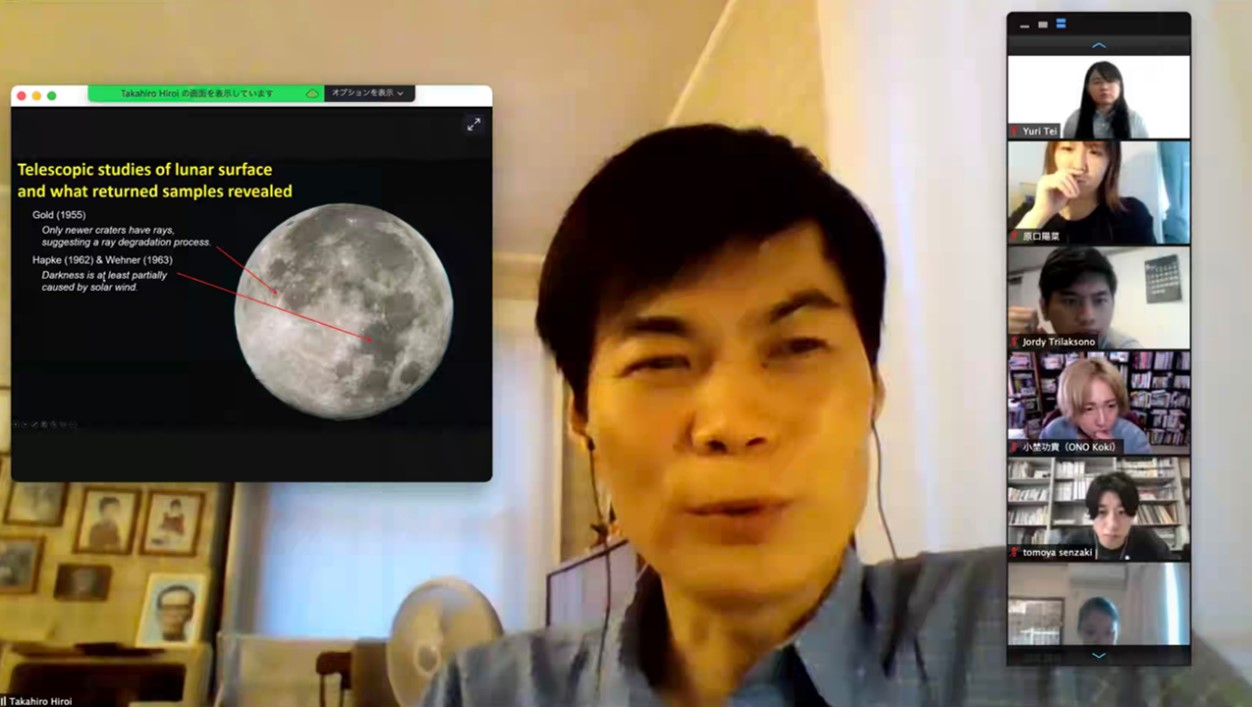 (Reported by Yasunari Shinoda, a second year of the doctoral student, Graduate Major in Nuclear Engineering, Department of Chemical Science and Engineering, School of Materials and Chemical Technology, Tokyo Institute of Technology, and 2018 ToTAL (Tokyo Tech Academy for Leadership) student)